I'd like you to meet 130 lbs of crazy, my beloved canine, Vegas. Yes, 130. He's part Bernese Mountain Dog and part Luck Dragon. 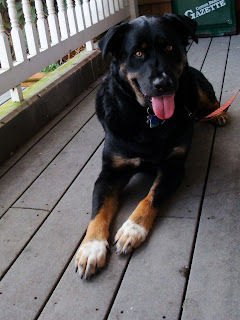 Over Labor Day weekend, I took Vegas camping. Now, Vegas is a good camp dog. He wasn't always; as a pup, he whined up a storm. His first camping experience with a big group, he got a piece of glass stuck in his paw as the result of an idiot acquaintance who put a bottle of Jager in the fire with the cap on. Luckily, he was able to recover and didn't resent me too much the next time I dragged him out on a camping adventure.

Now, I know it's against the rules, but when we're out camping, I tend to let Vegas run off leash as long as we're at least 1/4 mile from any other campsites (or the neighbors like him) and any roads. At our usual site, I'll take him out on a day hike out on one of the trails and let him go. He likes bounding through the brush and flying over fallen logs like a deer (I have NO idea how he gets that height when he complains about jumping up onto my bed, but I digress...), he stays withing my eyeline (he'll even stop and wait for me when he rounds a bend in the trail), and usually has amazing recall and will return as soon as he hears his name.

Notice the clever use of the word "usually"?


So, my friends L, S, and I decided to wander down one of the trails and take Vegas with. When we got about 1/4 mile-ish from the main campground, I let Vegas off his leash, and he took off. He ran off, and was out of sight within a second or two. The three of us wandered the trail a little while he burned off some energy, and sure enough, in a few minutes, he came back to us, grinning and panting, excited as could be. He led us futher up the trail, which winds around the top of a ridge. Down below, a river rages. Well, right now, not so much "rage" as we haven't had too much rain, but it definitely flows rather quickly, and it's pure glacier water - ie, not a good place to go play.

You see where this is going, don't you?

Vegas, excited as he is to be free, veers off the trail to the left and darts down the edge of a small cliff towards the river. We watch from about 30 feet up as he runs along the lower banks of the river. I let him frolick for a minute or two and then call him back. He turns as he hears his name, and comes flying back towards us. He gets about halfway up the cliff and freezes. Now, from my vantage point, all I can see is the look of "WTF?" on his face. He jumps backwards, heads down to the river bank, and races back towards us, taking a flying leap at the hillside. And scrambles, struggling to gain ground.

It's at this point that we realize that there's a tree root which he was able to spectacularly leap over on his way DOWN the cliff, but now, it stood as a treacherous obstacle to him getting back UP. The three of us call him repeatedly, cheering him on like we were members of the DCC, and he ran back to the river and charged at the hillside again. No luck. He just can't make it over the root, and is now stuck about 15 feet below us with a look of panic on his face. I give him credit, he was smart enough to figure out that since he couldn't go OVER the root, he should try going UNDER it, but really, he's 130 lbs. There was no way his frame was sliding underneath a tree.

So, down the cliff I go, trying to dig my feet into the loose earth and hope that I don't lose my footing and get stuck myself. (We're so far out in the middle of nowhere that only a Life Flight helicopter could come get an injured person - there's no chance of an ambulance making it in time). I carefully slide around behind him, gripping onto the same tree root that's keeping him, - now BOTH of us - trapped and try to push him forward.

Nothing doing, he's not going. Now, generally, I'm pretty good with keeping him in line with what he needs to do, but come on. He's panicked, and I'm hanging off the edge of the hillside by one hand, using the other hand to push on his back. Neither of us are in the best condition. Needless to say, we're still very, very stuck.

S. comes down, reaching for Vegas' collar, telling me that if I can push from behind, she'll pull from the front and get him up. I nod, but inside I'm now freaking because I've got a good friend of mine putting herself at risk, rescuing my crazy canine. (S, if you're reading this, I think you're amazing!) I push, she pulls, and between the two of us, we manage to get Vegas up the hillside and dust ourselves off.

The poor pup is utterly chastened at this point. He is NOT moving from our side. He's still off leash, but you wouldn't know it from how closely he's pressing up against our legs. S and I decide that suddenly, we don't need to take the day-hike we'd planned for the day, but decide to head back to camp and reward our rescue efforts with a strong drink. So that's exactly what we did.
Signed, Midwinter Graces at 6:52 PM