The death of Robin Williams hit me hard. After I received the news at work, I felt a sinking weight in my chest. Suddenly, I was grateful that my work day was near the end. I went home, and wrote this on Facebook:


I've been trying to understand why the death of Robin Williams has affected me so entirely. I've come to the conclusion that I grew up with this actor on screen. First in Mork and Mindy, then in Peter Pan and Mrs Doubtfire. Dead Poets spoke to me at a time when I was struggling to understand my own direction in life. His comedy spoke to me when I was learning to navigate my "adult" world and all of it's politics. In short, I feel as though I lost a longtime friend whom I had never met, and whose loss I will feel through all of the coming stages of my life. RIP Oh Captain, My Captain.

In the days that have followed, I've heard a lot of people say a lot of things. Some of them comforting, some in disbelief, and some in utter ignorance of the disease that is mental illness. Robin Williams was never secretive about his battles with depression and addiction.

Most people in my life know that I have serious anxiety issues. The thing is, I was officially diagnosed late in life, and now that my brain chemistry is effectively controlled by medications, I can not only enjoy my life, but I can look back and see just how much I was missing previously.

When I was a child, I was a nervous child. I worried constantly about what people thought of me, what my parents thought of me, what might happen if I went outside and did a particular thing, on a particular day. This isn't the type of self-consciousness most everyone tells me they feel. No. I was the girl who would stay in the car while her family went into the restaurant to eat, because I couldn't handle the potential complications that a crowd could bring.

For years, this condition was my fault. My parents even took me to a psychologist to, in their words, figure out "why no one liked me." (Not joking or exaggerating. That's what my mom said.) The psychologist's brilliant solution was to come to class with me and watch my interactions with my classmates to "see what I was doing wrong, and how I could improve my social skills". (Legitimately, that's why my medical records said).

Over and over again, I was told to snap out of it, to be brave, to get over myself, to take a deep breath and move on. I dealt with years of rolled eyes and barely-stifled groans from friends, and angry calls and texts when I couldn't muster the courage to go out and bailed on plans. I heard the whispers of family members who thought that I was selfish, spoiled, snobbish, or an awful daughter because I couldn't just be kind, friendly, and as sociable as they were.

Now, I hear the same thing about Robin Williams. He had so much to live for, so many people who loved him, so much money, such a great house and career... why couldn't he just "snap out of it" and be grateful for what he had? Couldn't he just "get over" his depression?

But that's not the way mental illness works. It's not like a bad mood that will fade shortly. It's not like you can fake-it-to-make-it. It eats at you. It haunts you. It twists your brain and spins your thoughts to the point where you're not yourself. It is absolutely IMPOSSIBLE to shake it off, sleep it off, or just smile it away.

The complete misunderstanding of mental illness in this country has been brought to public view by the death of a great man whom so many of us held close to our hearts.

If you, or anyone you know, is dealing with mental illness, please know that you're not alone. You aren't in this fight alone. I will understand you without question. Others are fighting alongside you. There are people out there waiting to help and listen. 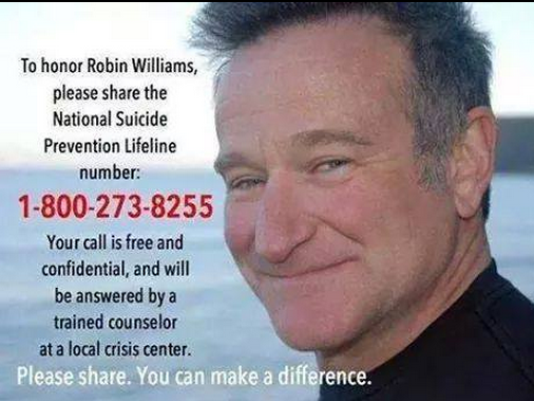