I, too, dreamed of being a princess. I think nearly every American girl in the proper age group, (and some in improper age groups) dreamed of marrying Prince William or Prince Harry and becoming the next princess. I get it, I really do. Even though the monarchy is all but extinct, there's still that fascination with British royalty, Buckingham Palace, and all that life entails.

I LOVE Kate Middleton. I really do. I love that her family came from blue-collar roots, that she's not an aristocrat, and that she's smart as hell and (from what I can tell) genuinely interested in making the world a better place. I ADORE the fact that Wills chose a woman that's very much like his mother, the late Great Diana, (I don't think we're allowed to call her a princess anymore? Not after the divorce?). I, honestly, could not be happier about the wedding because I think Wills and Kate are fricking adorable, and I wish them a long and happy life together.

Is anyone ELSE tired of hearing about the Royal Wedding? I'm not English, and I'm overwhelmed with it at every turn. The merchandising has just gotten out of control. There are William and Kate PAPER DOLLS? 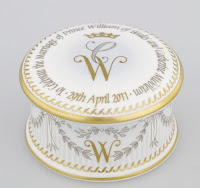 There's also something called a Royal Loving Cup...which, actually, sounds kinda dirty if you ask me. It also reminds me of the Loving Spoonful... and now I have 'Do You Believe In Magic' in my head. I'm not really sure what you're supposed to do with a Royal Loving Cup, but this is what one looks like. 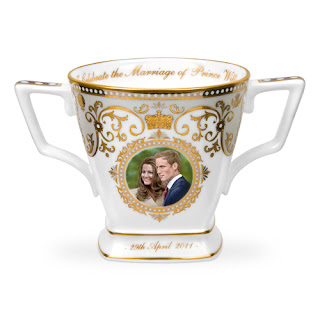 Plates, cups, saucers, paperweights, JIGSAW PUZZLES and a plethora of other items are available on Edwards China. Seriously, check it out if you want a giggle.
I thought we were obsessive about our celebrities in America. Hell no, turns out we have NOTHING on the English and their love for the royals. But what do the royals actually DO these days? They don't really create laws or lord over society. That's what Parliament and the Prime Minister are for. They're just sort of famous for....being famous...aren't they? Like Snooki and Paris? It's great, I love the marriage, like I told you...but I just don't get what the big DEAL is.
And I guess I'm just sort of...over it.
Signed, Midwinter Graces at 12:00 AM